Towards planetary stewardship as a professional discipline

This article is exploratory in nature, investigating the potential for creating a new academic and managerial discipline, one of planetary stewardship. Planetary stewardships has a ceiling, the environmental limits we must stay within, and a social floor, the provision of basic human rights we commit to uphold. Comments are invited below. 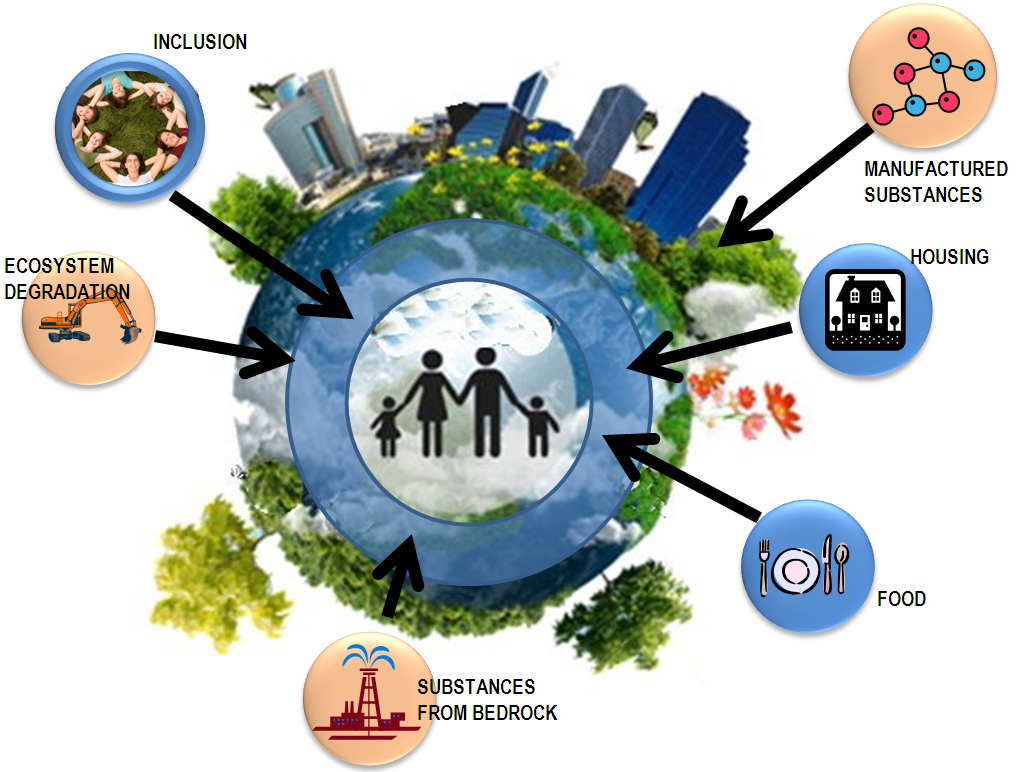 The role of economic controls in planetary stewardship: the blue circle represents the financial economy, the services it ensures to humans in blue, and the limits over environmental impacts it controls in yellow

We have reached planetary awareness and it is complex

The complexity of the task of dealing with the downsides of the industrial revolution is expanding rapidly. Reaching near-limits to growth in population, food production and water use, we are seeing planetary boundaries  overstepped by this  pressure exerted by our societal system. Major planetary cycles are in disruption: the hydrological cycle, the nitrogen and phosphorus are possibly the most important.

A systems perspective – and systems tools are needed

The diagram above, courtesy of the New Scientists, shows the first large data model to attempt a planetary management perspective: the World 3 model from 1972. This model was produced using a system theory approach an approach that fits well into the planetary stewardship discipline as it deals with complexity better than most approaches.

As the diagram shows, the predictions and modelling were uncannily accurate, most dotted lines (the actual results) following the solid, prediction lines. (This link  goes to recent research into the predictions.)

Indeed, even the economic system itself seems to be sagging under the pressure. Global economic growth is down, as are other indicators of economic activity, like the Baltic Dry Index – the indicator of how much dry bulk is being shipped by sea.

The task is one of ceiling and floor.

The ceiling is the limits to what can be extracted from the Earth’s crust (for example in terms of fossil carbons) and the ceiling is about the limits of what can be emitted (for example nitrogen into watercourses or carbon into the atmosphere.) The floor comprises the level of service to the human population. The floor is human rights provision at adequate levels, and includes food and water security as well as housing security., Food on the table and a roof over the head to put it simply.

But complex tasks can  be managed given the tools available; this is where big data plays in.

Planetary Stewardship would be  a multi-disciplinary and complex profession that involves the management of many values including: biodiversity, land status, water quality, toxin security, mineral cycling, food security, employment, and community stability.

The raw data is there

Land status data can be gained from satellites and drones. The owner of each of the properties can be identified using land registers and co-ordinates.

Mineral cycling can be managed using the ubiquitous bar-coding systems and recycling systems in place already in many countries.

Even other data can be collected from countries statistics organisations – on employment, food production and homelessness for example.

The question arises as to the role in the management of the planetary system of money. At the moment there seems to be a conflict between the financial and ecological worldviews.

This is where the challenge to Environmental Fiscal Reform comes in. 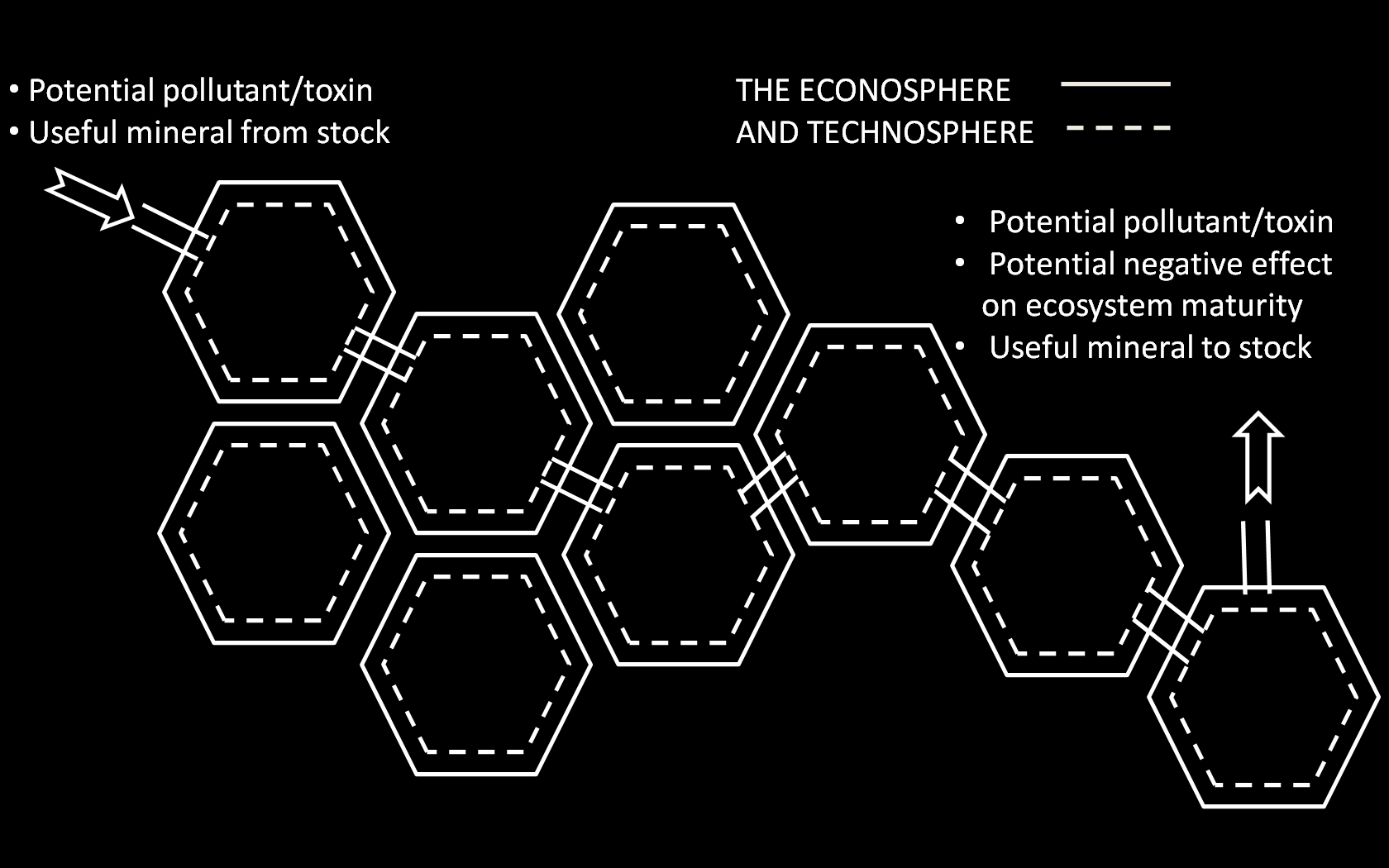 The diagram above shows the potential of the modern, digitalised economy to control the flow of substances through supply chains and to control the effect of the output of that legal entity into the biosphere.  Substances enter the economy into a legal entity, solid line, are managed in the technical handling of the entity (dotted Line) and are passed to other entities via  legal transaction(double solid line) until they leave.

Money is a highly regulated tool, the connection to legal entities and products (which is stipulated in the law covering how all transactions must be documented) can be used to control the flow of substances in and out of the economy.

By Econosphere we mean the area of activity that is controlled by the economic and fiscal system. Each of the hexagons above represents a legal entity which are either parcels of land or organisations. For a substance to enter the Econosphere, one of the legal entities must either purchase it or the right to extract it. The right to extract will come from an owner of land, which is itself registered as a legal entity.

Legal entities will create and distribute products. These products are traceable (including the materials they are made of) via the Global Product system which classifies it under type of product and then the legal entity that produced it, then a unique code to identify it. 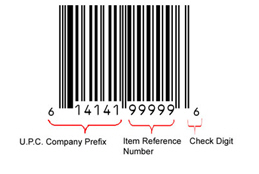 Each entity in the Econosphere has a company code, and each product has an item reference number.

RFID Radio-frequency identification (RFID) is a way to know where things are in the world. Tags are placed on for examples shipping containers containing information about the shipment. Readers can automatically identify and track these tags.

POTENTIAL POLLUTANTS AND SCARCE MINERALS CAN BE FULLY CONTROLLED

In this way,  the substance passes through various legal entities until it reaches its end of life.

Readers can see from the diagram, that as long as a substance remains in the technosphere and econosphere, it is under the control of the fiscal system. Through big data it is possible to know where it is in the world (by bar coding and RFID tags), what is in it (from the product classification and identification) and who has it (from invoice information).

At the same time, for there to be a management of the substance from a planetary point of view, most interest is where there is an input to the economy, and where there is a potential output. In both cases, the legal entities carrying out these activities are the main focus of attention. This narrows the size of the task down somewhat.

As demonstrated in the articles on EFR, control can be achieved by levying additional surcharges on already existing mechanisms, depending on the substance. An additional levy, for example could be placed on import fees for phosphorus in fertilizers. The import fee would be passed on to consumers. Raising the market price in this way would ensure that a market for recycling of this potential pollutant could arise.

The Swedish Sustainable Economy Foundation advises that fees should return to taxpayers as tax refunds and not be used by governments for other purposes. These fees are control mechanisms to ensure the market controls them.

End of life is also controlled by law. In many countries all waste is the jurisdiction of the municipal wast authority which by law takes care of end of life. Here, additional fees can be levied on waste fees to ensure that poisons, unsorted material, unreclaimable material etc. cost more. Again, this cost goes back to the consumer.

So,with big data monitoring status, with big data controlling material flows and with the fiscal system adding controls on inputs and outputs to the economy there is a good chance that the planetary system can be put on a healthy track.

To learn more about using levies to control inputs and outputs to the system see our short briefing, or consider joining one of our simulation sessions.

A brief summary of this article appeared in the Environmental Fiscal Reform Newsletter. Click here to subscribe.

4 responses to Towards planetary stewardship as a professional discipline