Money and markets are powerful tools in developing our world, most would agree. But many have experienced negative effects in their application; including environmental degradation, unequal distribution and crowded, unhealthy cities. To achieve a sustainable future, and the Sustainable Development Goals in particular, we must consider all options.  Should we abandon industrial capitalism and our present monetary system altogether or should we introduce some form of sustainable five-year planning regime? At the other end of the spectrum there is the idea to harness and utilize the power of money and markets to meet the challenge and to achieve our important goals.

The Swedish Sustainable Economy Foundation has shown that there is a reliable and practical way to improve the economic system and “to make it beneficial to do the right thing” in order to solve both local and global issues in an efficient and beneficial way.  In other words, properly applied, the power of markets and the use of money (i e, economic signals) as a tool can support and guide humanity towards a peaceful, sustainable and prosperous future.

See the economy as a system

The economic system is just that – a system –  and systems can be designed and utilized to perform to certain requirements. An economic system with the necessary control points and sufficient stabilizing feedback can serve humanity by ensuring that the better challenges are solved, the better it (economically) rewards everyone in the system. In other words, the Foundation is proposing a system upgrade, where it pays, the actors/people in the economic system, to act responsibly, fairly and sustainably.

The model requires the economic system to be aligned with, and to serve and support human values and needs and at the same time to care for the biosphere. Fortunately, advances in engineering and digital systems to control performance, allow this next leap to happen. Breakthrough developments in Market-Based Instruments relying on relevant information and giving feedback to citizens, like Climate Dividends, provide the platform for a new approach to benign financial and economic governance.

To understand the potential for a transformation of the financial system it is necessary to understand recent advances in engineering of system control. With the advent of digital technology, engineering has developed a way of applying a control layer to a device to ensure that it behaves according to intentions and specifications. Examples include the anti-locking devices fitted to brakes, cruise controls and the automatic landing systems in aircrafts. This is called control engineering.

The possibility for an economy that serves all is there

The benefit of the control engineering approach is that the controls can be simplified, yet the control will be more precise and the workings of the device can be highly sophisticated.

In a financial system, subsidies and surcharges on existing levies and/or taxes could act as actuators. The diagram below shows a simplified view of the financial system’s four main types of actors: citizens, firms (including banks), national government and local authorities.

Important to grasp from this diagram is the difference between private and public accounts. Only citizens hold private accounts, this includes ownership in firms and as tax-payers, influence over governing bodies. There are no citizens involved in the other three types of actors that are not also part of the citizens’ group. This means that the rules governing the system should be put in place to ultimately benefit citizens. 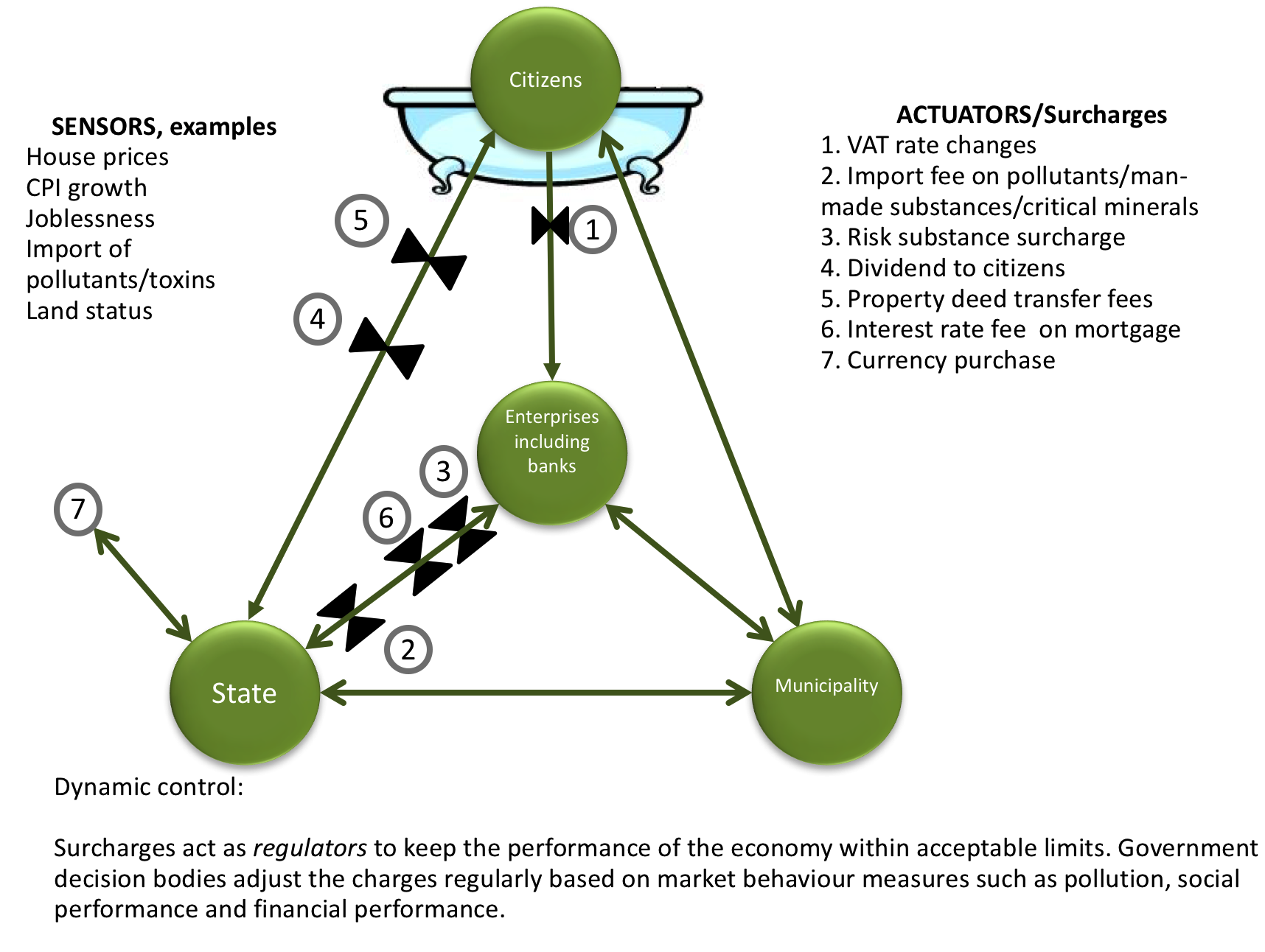 It is in this model that points can be identified where adjusting the incentives could radically change the purchasing and production behavior.

Add surcharges and negative charges to existing fees and taxes

Most tax and fee systems are rather complex. Adding more would only add to the complexity. The model proposes levying surcharges on already existing instruments to simplify administration. These surcharges (which also can be negative) can be levied on, for example, VAT, import fees, interest rates, employers’ tax and property deed transfers. For example, levying a surcharge on the import of fossil fuels would make fossil fuels and products dependent on fossil fuels more expensive and encourage the purchase of alternatives. If at the same time the revenues from the fees levied were to be paid back to citizens, then the purchasing power – and thereby overall demand in the economy – can be retained, this will act as a kind of actuator.

Step by step it could work like this for pollutants: a fee is levied on substances that pollute as they enter the economy. The fee is adjusted depending on how the market responds in reducing pollution. If targets are not met, the fee is increased. If they are above target, the fee is reduced.

An essential feature of stabilizing mechanisms is feedback. A sufficient proportion of the fees levied should be channeled back to taxpayers as a dividend. The increased costs of production inputs due to the fees are merely passed on to consumers. This could, potentially, have a negative influence on the total demand and could be negative for an economy, so feeding back the revenues from the fees as dividends to maintain the buying power and the circulation of money is essential for a robust and healthy economy.

So, the slower the market responds to pollution surcharges, the higher the fee, and the bigger the revenue and the more economically beneficial distribution of the dividend to the people (i e, the consumers) making it possible to afford and to purchase the non-polluting and more sustainable environmentally friendly alternatives on the market.

In this transparent and efficient way, the power of the market can be harnessed to create a reliable and sufficient, true demand for non-polluting products and services.