Released today, The Nordic Council of Ministers report Two approaches to pricing pollution TN2014:512, compares the efficacy of Cap and Trade with a Flexible Fee approach, as put forward by the Foundation.

In comparison is the commonly used Cap and Trade method with an alternative and novel method for pricing pollution: The aim was to conduct a practical approach to clarify advantages and challenges of the respective mechanisms.

The publication of the Nordic Council report comes as the Foundation publishes its own detailing how a flexible fee can be introduced to drive the circular economy. 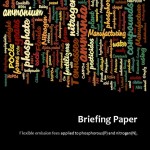 The main differences in approach between Cap and Trade and Flexible Fees can be summarized as follows:

As identified above, pollution in the Flex Fees approach is managed by putting a fee on the pollutant as it enters the economic system. Cap and Trade puts a fee on specific identified points of pollution. Pollution is seen more as a nuisance to be cleaned up by Cap and Trade. Flex Fees sees pollution in a more subtle way, as congestion in nature of a valuable resource that is not being used to do its job where it should be doing it.

Fees are levied at the point of entry into the market and raised until pollution stops in the Flex Fees approach. In Cap and Trade they are set by experts and left to work over long periods of time.  Flex Fees are levied upstream so that all pollutant use is regulated, rather than just specific points – this often means that fewer points of fee levy are needed in the flex method and more remittent sources are covered.

In Cap and Trade, authorities purchase remedial works, whereas in Flex Fees, the money collected goes into consumer’s pockets for them to spend as they will. More polluting solutions however will be comparatively more expensive. By redistributing Flex Fees, the market is stimulated to behave in a clean way.

The role of the market

In Flex Fees the role is to stimulate the market is to stop pollution by providing consumers alternatives. In Cap and Trade the emphasis is on stopping a particular behaviour by making it more expensive and purchasing clean up services. In Flex Fees the role of the market is to solve the problem, and it is given the financial incentive to do it rather than the punishment for not doing it.

Download the appendix, step by step comparison of approaches. COMPARISON_FFCT